ChemResearch Named One Of The Top 50 Finishing Shops In U.S. ……Back to Back

11 Sep ChemResearch Named One Of The Top 50 Finishing Shops In U.S. ……Back to Back

Posted at 10:43h in News by admin
ShareTweet

CINCINNATI, Ohio – ChemResearch Corporation re-branded as CRC Surface Technologies has been named one of the best finishing shops in the U.S., according to an industry benchmarking survey conducted by Products Finishing magazine, a trade publication which has covered the industry since 1938.

Only the top 50 shops were given the honor of being a Products Finishing magazine ‘Top Shop’ based on a scoring matrix of those four criteria. 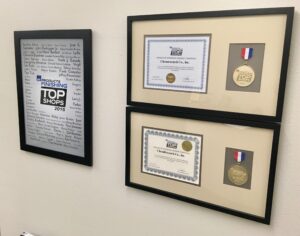 “We are excited and honored to be named in back to back years (2016 & 2017) one of Products Finishing magazine’s ‘Top Shops’,” said James Burriss, President & CEO of ChemResearch Corporation. “Team CRC, all 75 employees, are committed to be the best in the industry and to continuously improve our performance so we may exceed customer expectations and modernize our business practices.”